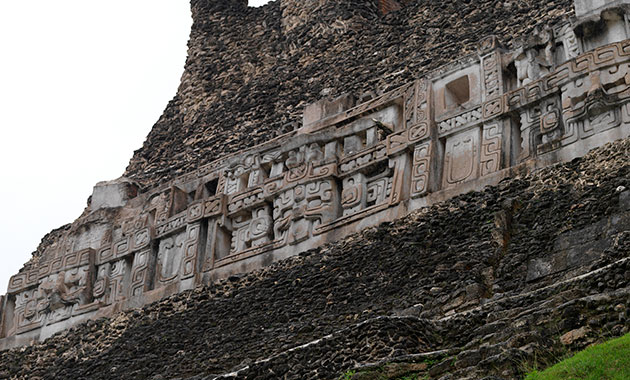 Xunantunich, also known as the “Maiden of the Rock,” is the second tallest Mayan ruin in Belize. It stands 130 feet high to give a panoramic view of the Cayo District, nearby Guatemala, and the Mopan River. The centre of Xunantunich occupies an area less than a square mile. The centre is composed of six major plazas surrounded by more than 25 temples and palaces. The large pyramid, El Castillo, is well known for the frieze or band of stucco decoration that at one time extended around the entire temple.

We highly recommend that you make the steep, but short, climb to the top of “El Castillo.” This vantage point provides a breath-taking, 360 degree, panoramic view over the jungle canopy of the Mopan River valley, as well as a vast area of the border towns of Benque Viejo del Carmen in Belize and Melchor De Mencos in Guatemala, which is only a few miles away. You will also get a close look at the restored portions of two unique stucco friezes, which appear on the east and west sides of the upper portion of the pyramid.

This website uses cookies to improve your experience while you navigate through the website. Out of these, the cookies that are categorized as necessary are stored on your browser as they are essential for the working of basic functionalities of the website. We also use third-party cookies that help us analyze and understand how you use this website. These cookies will be stored in your browser only with your consent. You also have the option to opt-out of these cookies. But opting out of some of these cookies may affect your browsing experience.
Necessary Always Enabled
Necessary cookies are absolutely essential for the website to function properly. These cookies ensure basic functionalities and security features of the website, anonymously.
Functional
Functional cookies help to perform certain functionalities like sharing the content of the website on social media platforms, collect feedbacks, and other third-party features.
Performance
Performance cookies are used to understand and analyze the key performance indexes of the website which helps in delivering a better user experience for the visitors.
Analytics
Analytical cookies are used to understand how visitors interact with the website. These cookies help provide information on metrics the number of visitors, bounce rate, traffic source, etc.
Advertisement
Advertisement cookies are used to provide visitors with relevant ads and marketing campaigns. These cookies track visitors across websites and collect information to provide customized ads.
Others
Other uncategorized cookies are those that are being analyzed and have not been classified into a category as yet.
SAVE & ACCEPT
GET 20% OFF